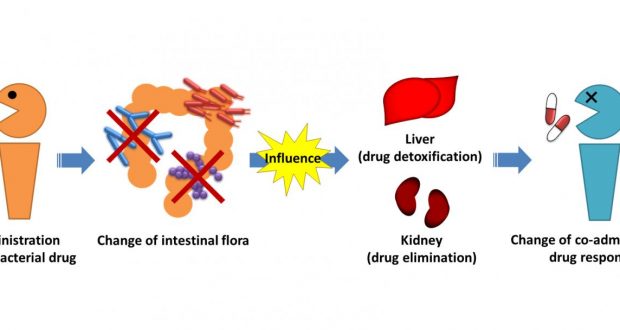 Antibacterial drugs cause changes in the intestinal flora. These changes have an influence on the capacity of the liver and kidneys to detoxify and eliminate therapeutic drugs due to large changes in the metabolizing and transport proteins.

Antibacterial and antibiotic drugs are often prescribed for the treatment and prevention of bacterial infections and are often taken with therapeutic drugs to prevent recurrence of infection during treatment. Unfortunately, the drugs affect not only harmful bacteria, but also the naturally occurring bacteria within the intestine. To determine the effects of this influence on drug efficacy, Kumamoto University researchers investigated protein changes in the liver and kidney. Changes in these proteins have a great influence on drug efficacy and side effects since they are responsible for the metabolism and transport of many drugs, and are also affected by changes in the intestinal flora.

The research was conducted using three different groups of mice, an experimental group of germ-free mice which were free of intestinal bacteria since birth, a group of mice that had received antibacterial drugs for 5 consecutive days, and a control group of mice with naturally occurring intestinal flora. Researchers used proteomics, a large-scale analysis of proteins, to clarify changes in the amount of the proteins involved in drug metabolism and transport in the liver and kidney of the two experimental mouse groups.

“The most significant drug-metabolizing enzyme that decreased was cytochrome P450 2b10 (Cyp2b10),” said Professor Ohtsuki, who lead the research project. “Not only was the amount of the enzyme reduced nearly 96%, but the metabolic capacity of the drug in the liver was also reduced by approximately 82%. Cyp3a11, a similar type of enzyme was also reduced by about 88%. The human enzymes corresponding to these 2 enzymes, CYP2B6 and CYP3A4 are reported to be related to the metabolism of more than half of the pharmaceuticals on the market.”

Additionally, the breast cancer resistance protein (Bcrp1), a protein that transports many kinds of cancer drugs, was reduced by more than 50% in the livers of both experimental groups. Antibacterial drugs are sometimes prescribed to treat and prevent infection caused by bone marrow suppression, a side effect of cancer drugs.

“The results of this study show that many drugs may be affected by changes in the intestinal flora,” said Professor Ohtsuki. “In the future, if it is confirmed that similar mechanisms exist in humans, we expect our research to lead to optimal dosing and a reduction in drug side effects.”

This finding was posted on Molecular Pharmaceutics, on July 5th, 2016.