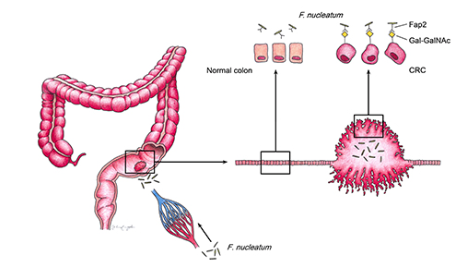 Boston, MA — Some bacteria, called fusobacteria, commonly found in the mouth, use a sugar-binding protein to stick to developing colorectal polyps and cancers, according to a new study by researchers from Harvard T.H. Chan School of Public Health and Hebrew University-Hadassah School of Dental Medicine. While certain fusobacteria have previously been shown to worsen colorectal cancer in animals by the Garrett Lab at Harvard Chan School, this study is the first to demonstrate how they may get to and stick to developing tumors.

Understanding this mechanism is an important step toward fighting colorectal cancer, said co-senior study author Wendy Garrett, Melvin J. and Geraldine L. Glimcher Associate Professor of Immunology and Infectious Diseases at Harvard Chan School. It might inform ways of blocking fusobacteria from homing in on colorectal tumors, she said. “Alternatively, and perhaps more importantly, our findings suggest that drugs targeting the same or similar mechanisms of bacterial sugar-binding proteins could potentially prevent these bacteria from exacerbating colorectal cancer.”

The study was published online August 10, 2016 in Cell Host & Microbe.

Colorectal cancer is the third leading cause of cancer-related deaths in the United States, and microbes have emerged as key factors that influence the development and progression of the disease.

This work was supported by the Israel Cancer Research Fund Project, the Israel Science Foundation, the National Institutes of Health (National Cancer Institute), and a Hoffman-LaRoche research grant. Garrett is a SAB member of Evelo Therapeutics and Synlogic and has consulted for Janssen Pharmaceuticals.