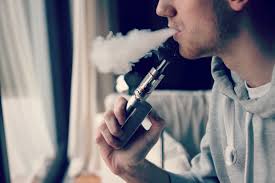 Vapers and non-smokers have the same flourishing gut flora

The international team of researchers led by Newcastle University, analysed the bacteria of tobacco smokers, users of e-cigarettes and non-smokers from samples throughout the digestive tract, including in the mouth and gut.

Significant changes were found in the gut bacteria of the smokers, with an increase in the Prevotella bacteria which is linked to an increased risk of colon cancer and colitis.

There was also a decrease in the presence of Bacteroides in smokers, a beneficial bacteria or probiotic. A lower level of Bacteroides has been associated with Crohn’s disease and obesity.

In contrast, the gut flora of those using e-cigarettes was the same as a non-smoker.

Lead author of the study was Dr Christopher Stewart from the Institute of Cellular Medicine at Newcastle University who published the findings today in PeerJ. He explains: “The bacterial cells in our body outnumber our own human cells and our microbiome weighs more than our brain, yet we are only just beginning to understand its importance on our health.

“More investigation is needed but to find that vaping is less-damaging than smoking on our gut bacteria adds to the incentive to change to e-cigarettes and for people to use them as a tool to quit smoking completely.”

This pilot study is the first to compare microbiota in tobacco smokers and electronic cigarette users.

This revealed significant changes in the gut bacteria of the faecal samples.

Dr Stewart adds: “This research comes as we see a huge increase in the numbers of people using electronic cigarettes and it becomes increasingly important that we understand the effect on the human body.”

As more people take up vaping, the team call for further research to be carried out and to follow up on this pilot study, they are aiming to study a much larger group over a longer period. They also suggest that further investigation into sex-specific microbiota profiles is carried out, as this study involved only two women.