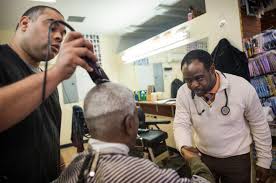 Aging black men are at much greater risk of dying prematurely of colorectal cancer than any other group in the United States, and are less likely than their white counterparts to be diagnosed at an early stage of the disease. Now a new study finds that patients who enrolled for screening through patient navigator programs at local barbershops were twice as likely to get screened for colorectal cancer.

The new clinical trial was led by the Department of Population Health at NYU Langone Health and published recently in the American Journal of Public Health. It is the first, say the authors, to evaluate patient navigation–in which healthcare staff guide patients toward colorectal cancer screening in a timely fashion–in a familiar community setting.

Unlike the newly published MISTER B study (the Multi-intervention study to Improve colorectal cancer Screening and To Enhance Risk reduction in Black men), most prior studies of programs that link black men to patient navigators for colon cancer prevention have based themselves at clinics. Specifically, the researchers found that participants who received help from the navigators in MISTER B were twice as likely to get screened as those who did not receive a patient navigator.

“Black men are less likely than the general population to be insured and to have a personal doctor, which is why we went beyond the clinic and to the community,” said Joseph Ravenell, MD, MPH, the principal investigator of the study and associate professor in the Department of Population Health at NYU Langone’s Center for Healthful Behavior Change. “Barbershops in particular hold special appeal for community-based intervention trials, are popular forums for open conversation, and could be leveraged to lessen the death rate from colorectal cancer in black men.”

How the MISTER B Study Was Conducted

From late 2009 to late 2013, community health workers visited 111 interested barbershops in all five boroughs of New York City and screened 4,025 black male customers or nearby residents aged 50 or older for eligibility based on whether they were up-to-date for colorectal screening. The study then enrolled 731 men in one of three groups.

The first group was paired with a patient navigator who helped them address barriers to setting up a colorectal screening. These included a lack of insurance coverage and a lack of knowledge about the need for screening, available options, and screening locations. The second group, which was the control group, received motivational interviewing intervention for blood pressure control by a trained counselor. The third group received both interventions.

Those randomized to the patient navigation intervention received follow-up phone calls from patient navigators within two weeks and then periodically over the course of six months to help them schedule a colonoscopy, or choose another type of screening for colorectal cancer. Participants who preferred fecal immunochemical test screening were sent a kit and instructions by mail, and received follow-up calls from the navigator to confirm the testing.

The participants faced several challenges in getting adequate healthcare, according to study findings. Only 60 percent had a personal physician, and only 40 percent had received a checkup within the past year. Many were uninsured and had low health literacy. The median salary was $16,726–an income low enough in New York City to make someone eligible for housing assistance. Almost one-third had less than a high school education, and nearly one-half were unemployed.

“Although previous studies have shown that patient navigation improves colorectal cancer screening among ethnic minorities in clinical settings, our study is the first of this scale to look at a community approach,” said Helen Cole, DrPH, first author and a former project coordinator at NYU Langone, who is now a postdoctoral fellow at Institut Hospital del Mar d’Investigacions Mediques in Barcelona, Spain. “These findings add to the growing body of evidence that healthcare systems should expand their work in trusted community spaces to reach those who might not be seen in a clinical setting.”

Along with Dr. Ravenell and Dr. Cole, the study authors were Hayley Thompson, PhD, of the Population Studies and Disparities Research Program in Communication and Behavioral Oncology at the Karmanos Cancer Institute; Marilyn White, MD, and Ruth Browne, PhD, of the Arthur Ashe Institute for Urban Health; Chau Trinh-Shevrin, DrPH, and Scott Braithwaite, MD, MS, of the Department of Population Health at NYU School of Medicine; Kevin Fiscella, MD, MPH, of the Departments of Family Medicine and Public Health Sciences at the University of Rochester School of Medicine and Dentistry; and Carla Boutin-Foster, MD, MS, of the Division of Clinical Epidemiology and Evaluative Sciences at Weill Cornell Medical Center.