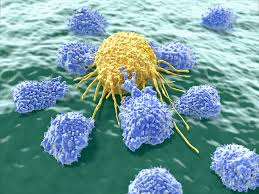 An international collaboration between the University of Oxford and other European institutions has uncovered a correlation between a rare mutation in bowel cancers and a better prognosis, raising the possibility that patients with such tumours may not require chemotherapy after surgery.

The study focused on colorectal (bowel) cancers and examined the presence of mutations in a gene that is essential for the accurate copying of DNA when cells divide, known as DNA polymerase epsilon (POLE). As a consequence of the defects in copying their DNA, these tumours accumulate a much higher number of additional mutations than other bowel cancers – a characteristic that may explain an apparently enhanced immune response against them.

Although POLE mutations are uncommon in bowel cancer, only occurring in 1-2% of all bowel cancer cases, this still translates to 6,000-12,000 patients each year in Europe and the US alone.

The researchers found that bowel cancers with POLE mutations were substantially less likely to recur than other tumours, and that this association appeared particularly strong in the subset of cases diagnosed at an early stage, for which the benefits of chemotherapy treatment are relatively modest. However, because most patients included in the study had been treated with chemotherapy, the group was unable to verify whether the good prognosis was attributable to the POLE mutations alone or a combination of the latter and chemotherapy.

‘We and others have previously shown that POLE mutations identify a subset of womb cancers with an excellent prognosis, and this study suggests that this association extends to cancers of the bowel. Although these mutations are rare, because bowel cancer is one of the most common tumours, they have the potential to influence the care of several thousand patients each year in Europe and the US.

‘However, further work is required to confirm our results before they can be translated into clinical practice, particularly as at the moment we are unable to determine whether the good prognosis of these cancers is independent of chemotherapy treatment after surgery. We are testing more cases and hope to complete these studies in the next couple of years.

‘We are also interested in determining whether the very high number of mutations these cancers carry means that they are more susceptible to drugs targeting the immune system, which we know is a key determinant of prognosis for cancer patients.’

Professor Ian Tomlinson, Chair of Molecular and Population Genetics at the Wellcome Trust Centre for Human Genetics, and a senior author of the study said: ‘While these results are encouraging, further studies are required before our findings can be used to inform the care of patients. We are therefore actively collaborating with our clinical colleagues in the National Cancer Research Network to evaluate the use of this test in the clinic, with the aim of confirming our results and expediting clinical implementation.’