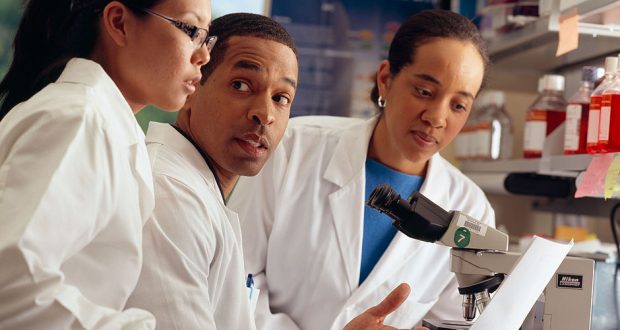 Researchers at Tufts University have elucidated a mechanism by which the “good” bacteria that reside in our gastrointestinal tract can help protect us from inflammation, and how their disruption (dysbiosis) can increase the susceptibility of the liver to more harmful forms of disease. Their study, now available in the journal Cell Reports, identified two key metabolites produced by the bacteria in mice that modulate inflammation in the host and could ultimately reduce the severity of non-alcoholic fatty liver disease.

Non-alcoholic fatty liver disease (NAFLD) is a prevalent condition in Western countries, affecting up to 25 percent of adults, tracking along with trends in obesity and diabetes. The severity of symptoms can vary, ranging from simple steatosis, which is benign and asymptomatic, to non-alcoholic steatohepatitis (NASH), which is characterized by liver inflammation, swelling and fibrosis and can lead to cirrhosis and liver cancer.

People who eat a high fat diet are more susceptible to NAFLD. Replicating that diet in mice, the researchers found that within just a few weeks, their intestinal microbiota changed character significantly, with some species of bacteria increasing and others decreasing. At the same time, an inventory of metabolites in the mouse’s GI tract, serum and liver showed some metabolites known to be linked to intestinal microbiota to shift compared to mice on a low-fat diet. Three of those metabolites – tryptamine (TA), indole-3-acetate (I3A), and xanthurenic acid – were significantly depleted in high fat diet mice.

“That’s bad news for the liver,” said Kyongbum Lee, Ph.D., professor of chemical and biological engineering at the School of Engineering at Tufts. “We demonstrated that two of these metabolites – I3A and TA – attenuate the effects of inflammation in several ways. Their depletion clears the way for disease to progress toward more serious stages.”

Some of those effects of I3A and TA include reducing the level of inflammation-inducing molecules (known as cytokines) like tumor necrosis factor alpha, interleukin-1-beta, and monocyte chemoattractant protein. The latter acts as an attractant for macrophages, which in turn produce more cytokines. All of these inflammatory agents are triggered by high levels of free fatty acid accumulation in the serum and liver – the hallmark of NAFLD, and the consequence of an unhealthy high fat diet.

Researchers also considered whether I3A and TA could be added back to the gut to help treat those with the more serious inflammatory stages of NAFLD. However, it was determined that high levels of TA are toxic. “Our focus now is on I3A, where we will be exploring whether I3A or other microbiota metabolites can change the course of disease,” said Lee.

Other contributing authors include Smitha Krishnan, Maria Choi, and Gautham Sridharan of the Tufts Department of Chemical and Biological Engineering, Nima Saedi and Martin Yarmush of the Center for Engineering in Medicine at Massachusetts General Hospital, David Sherr of the Boston University School of Public Health, and Robert Alaniz of Texas A&M University College of Medicine, and Yufan Ding and Arul Jayaraman of Texas A&M University Department of Biomedical Engineering.