When going in for a medical procedure, you probably want to be certain the doctor’s instruments are clean. Following a recent turnabout by the U.S. Food and Drug Administration, that certainty may be a little harder to come by.

Six months ago, the regulator said a machine tied by a U.S. Senate report to a deadly superbug outbreak should be taken off the market “as soon as possible” to protect public health. Twice. But the machine, which uses water, disinfectant, and sound waves to clean certain surgical instruments, remains in use for some of those instruments after FDA officials backed down. And no one is saying precisely why.

The FDA ordered a small Ivyland, Pa.-based company called Custom Ultrasonics Inc. to take its 2,800 System 83 Plus machines out of service. The automated washing machines are used across the U.S. to clean endoscopes, devices with a light and camera on one end for probing inside your body. A specialized type of endoscope known as a duodenoscope, used to look in tiny crevices of the small intestine, has proven particularly hard to clean and was linked to antibiotic-resistant infections at hospitals over the last few years.

The use of Custom Ultrasonics equipment was one of several factors that “likely contributed” to dangerous infections spread by inadequately cleaned duodenoscopes, according to a report issued this year by Senate Democratic staff investigating the incidents. Up to 350 patients may have been infected at dozens of hospitals since 2010, according to separate documents released in April by the House Committee on Oversight and Government Reform. The exact number is difficult to ascertain because reporting of cases has been spotty, though more than a dozen patients who were infected subsequently died. Not all outbreaks occurred at hospitals using Custom Ultrasonics machines, and the company has previously denied in court filings that its machines are unsafe or contributed to patient injury or death.

In its November 2015 correspondence with the company demanding a recall, the FDA raised concerns about the device’s compatibility with disinfectants, whether it works with duodenoscopes, and whether it properly eliminates microorganisms from water. In pulling back that recall demand, the regulator now says it’s working with the company to ensure that the machines “are validated in a timely manner,” according to agency spokeswoman Deborah Kotz. “Validated” means the company has to prove the devices work as advertised. In the meantime, the machines can still be used to clean instruments including most endoscopes—just not duodenoscopes, she said. The reversal was “based on information provided by the company,” Kotz said, without elaborating. “We have nothing more to share on this at this time.”

With the new FDA position, Custom Ultrasonics said in a notice posted on its website that it will send hospitals a label to affix to the washers. The label warns users not to use the machines to clean duodenoscopes.

Robert Blanchard, director of product management and sales for Custom Ultrasonics, said in an e-mail that the company declined to comment on the FDA letters. 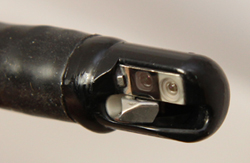 The problem with duodenoscopes, used in more than a half-million procedures in the U.S. each year, is that they have an intricate design making them particularly difficult to clean. An expert panel convened by the FDA last May concluded the devices aren’t reliably safe. In August, the agency recommended additional cleaning protocols to reduce risk of infection, including repeat washing, testing for contamination, or using a gas called ethylene oxide to sterilize the instruments. One model of scope made by Olympus was recalled for repair in January.

The FDA’s scrutiny of Custom Ultrasonics predates the recent outbreaks. Inspections as far back as 1991 found “significant violations” of federal rules meant to ensure quality manufacturing and timely reporting of patient harm, according to a 2006 complaint filed by federal prosecutors in Philadelphia. Similar violations were evident in inspections in 1992, 1995, 2005, and 2006, according to the lawsuit. Thirteen patients tested positive for hepatitis C after being treated with endoscopes cleaned by Custom Ultrasonics’ System 83 Plus machine, according to court filings (over a period of time that wasn’t specified). The company learned of the infections in 2004 and was required by law to report them to the FDA within 30 days, prosecutors said, but didn’t do so for more than two years.

The government lawsuit led to a consent decree in January 2007 that remains in force, and was the legal basis for the latest recall. (Custom Ultrasonics didn’t admit any wrongdoing as part of the agreement.) Under its terms, the company was initially barred from making or selling the devices. A few months later, however, the FDA found that it was complying with the decree and allowed it to resume operations on a limited basis.

But in 2012, the FDA ordered a recall of the System 83 Plus devices because of “recurring violations” of the law and consent decree, according to the agency’s recent directive to the company. After another inspection, the FDA reiterated its recall order, and wrote that the company must pay damages under the consent decree. In April 2015, the regulator found that the company hadn’t validated several aspects of its machine, including water filtration, compatibility with disinfectants, and that it fully cleans duodenoscopes, the same issues (PDF) raised in the most recent recall.

Two bluntly worded letters dated Nov. 12, 2015 (PDF) and Jan. 29, 2016 (PDF) indicated that, given the company’s ”lengthy regulatory history,” merely trying to fix the machines wouldn’t suffice. The first letter instructed the company to recall all of them, at its own expense, and figure out how hospitals could “transition from the System 83 Plus as soon as possible.” The second letter (PDF) said the company’s response to the first letter was insufficient because it only offered to correct the machines “rather than to remove those devices from use.” The agency wrote, in bold text, “FDA orders Custom Ultrasonics to immediately recall all System 83 Plus devices by removing them from use.”

Then, some weeks later, the FDA backed off.

The tenor of the two letters made the agency’s turnaround puzzling, said Mark Duro, director of sterile processing operations at New England Baptist Hospital in Boston.

“In the 20 years that I’ve been in the business, I’ve never seen a recall get changed like that,” said Duro. His hospital doesn’t use Custom Ultrasonics equipment, but he said he remembers when the FDA determined in 2009 that a similar machine wasn’t cleared for use because it didn’t work as advertised. That time, the agency didn’t back down. “We were forced to buy new devices,” Duro said.

Replacing a cleaning machine can cost tens of thousands of dollars and ”put a ton of hospitals in a world of hurt,” Duro said. It’s not clear how many hospitals are still using Custom Ultrasonics devices. Nine out of 16 U.S. hospitals that had superbug cases linked to duodenoscopes were identified in the Senate staff report as using Custom Ultrasonics machines to clean them. Only one of the hospitals, Hartford Hospital in Connecticut, said it “immediately” replaced the machines with other models after the recall.

Four hospitals where (according to the report) an estimated 86 patients were infected with superbugs declined to answer whether Custom machines were still being used to clean their endoscopes, which is still permitted under the FDA’s current ruling. They include New York Presbyterian/Weill Cornell Medical Center in New York; UMass Memorial Hospital, in Worcester, Mass.; Advocate Lutheran General Hospital, in Park Ridge, Ill.; and Carolinas Medical Center in Charlotte, N.C.

Two hospitals—UCLA Medical Center in Los Angeles and Massachusetts General Hospital in Boston—said they are in the process of switching to other vendors. Both said they have already put stricter measures in place for the hard-to-clean duodenoscopes linked to the outbreaks.

Lawrence Muscarella, a former director of infection control for Custom Ultrasonics who left in 2013, said the FDA’s change of course ”appears to be sending the wrong message, that it may ‘reward’ a regulated company for not complying with an order to remove a censured device for all U.S. hospitals.” Muscarella said patients should know if the hospital they’re being treated at is using equipment that has raised safety concerns: “It’s okay for hospitals to do that, provided the patient is told of this, so patient is aware of the care that they’re getting.”