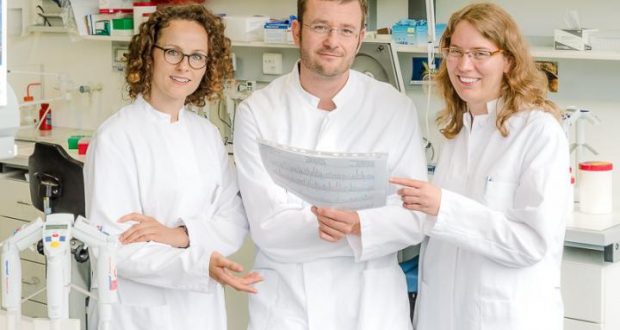 Discovery of a novel gene for hereditary colon cancer

The formation of large numbers of polyps in the colon has a high probability of developing into colon cancer, if left untreated. The large-scale appearance of polyps is often due to a hereditary cause; in this case the disease can occur in multiple family members. Under the leadership of human geneticists of the University Hospital Bonn, a team of researchers discovered genetic changes in the MSH3 gene in patients and identified a new rare form of hereditary colon cancer. The results have now been published in the American Journal of Human Genetics.

Colon polyps form like mushroom-shaped growths from the mucosa and are several millimeters to several centimeters in size. They are benign and generally do not cause any symptoms – however, they can turn into malignant tumors (colon cancer). Physicians refer to the development of a large number of polyps in the colon as “polyposis.” Scientists have already discovered several genes associated with a polyposis. “However, about one-third of families affected by the disease do not have any abnormalities in these genes,” says Prof. Dr. Stefan Aretz, head of the working group at the Institute of Human Genetics at the University of Bonn Hospital. Therefore, there would have to be even more genes involved in the formation of polyps in the colon.

Together with pathologists from the University Hospital Bonn, scientists from the Yale University School of Medicine in New Haven (USA), and the Frankfurt University Hospital, the team working with Prof. Aretz investigated the genetic material (DNA) of more than 100 polyposis patients using blood samples. In each patient, all of the about 20,000 protein-coding genes known were simultaneously examined. In this process, the scientists filtered the rare, possibly relevant genetic changes out of the gigantic quantity of data, like the proverbial needle in a haystack. In two patients, genetic changes (mutations) were discovered in the MSH3 gene on chromosome 5.

Proof of causes is like a trial based on circumstantial evidence

“The challenge is proving the causal connection between the mutations in this gene and the disease,” says Prof. Aretz. The process is similar to that of a trial based on circumstantial evidence. Family members also play a role here: The siblings with the disease have to have these same MSH3 mutations as the patient who was first examined, but not the healthy relatives. That was the case. In addition, the scientists investigated the consequences for patients resulting from the loss of function of the MSH3 gene. “It involves a gene for the repair of the genetic material,” reports Dr. Ronja Adam, one of the two lead authors from Prof. Aretz’s team. “The mutations cause the MSH3 protein to not be formed.” Since the protein is missing in the cell nucleus of the patient´s tissues, there is an accumulation of genetic defects. The mutations which are not repaired then predispose to the more frequent occurrence of polyps in the colon.

The newly discovered type of polyposis, in contrast to many other forms of hereditary colon cancer, is not inherited dominantly, but instead recessively. “This means that siblings have a 25 percent chance of developing the disease; however, the parents and children of affected persons only have a very low risk of developing the disease,” explains Dr. Isabel Spier from the Institute of Human Genetics, who was also very involved in the study.

The annual colonoscopy is the most effective cancer screening method for polyposis patients. As a result, the development of colon cancer can be effectively prevented. By investigating the MSH3 gene, a clear diagnosis can be made prospectively in some other, previously unexplained polyposis cases. Afterwards, healthy persons at risk in the family can be tested for the mutations. “Only proven carriers would need to take part in the intensive surveillance program,” says the human geneticist. In addition, science would gain new insights into the development and biological foundations of tumors through the identification of mutations in the MSH3 gene. Prof. Aretz: “The knowledge about molecular mechanisms which lead to cancer is also a precondition for the development of new targeted drugs.”