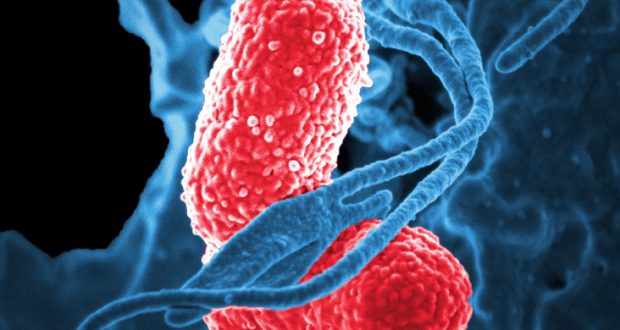 Antibiotic resistance is a major health threat, with about two million people in the US getting an antibiotic-resistant infection per year, according to the Centers for Disease Control and Prevention (CDC). Gram negative bacteria, including types like E.coli and Salmonella, are often more difficult to kill because of their two-pronged defenses. They have two membranes rather than one, and also have numerous toxin pumps embedded in the membranes to expel any antibiotic that may have made it through. Now Jefferson researchers have uncovered how to target both of these defenses with one hit, which could help make antibiotics more effective.

“We showed that interfering with a transfer RNA (tRNA) molecule, in a way that is unique to bacteria, cripples the bacterial cell’s ability to make membrane proteins required for the drug barrier and efflux activity,” said senior author Ya-Ming Hou, PhD, professor of biochemistry at the Sidney Kimmel Medical College at Jefferson (Philadelphia University + Thomas Jefferson University). The work was published in the journal Cell Systems.

tRNA molecules are not a typical antibiotic target. These molecules are part of the protein-building machinery that is essential for the daily function of cells in every living being. However, Hou’s team examined a kind of chemical “decoration” process in bacterial tRNAs that is absent from human cells. This difference between bacteria and humans makes this process a better drug target, since it’s less likely affect human cells.

tRNAs are decorated with chemical groups that are added on after tRNAs are synthesized in a cell. Hou’s group examined one such decoration, the addition of a methyl group to one particular location on the spine of several tRNAs. In earlier work, Hou’s lab showed that when these tRNAs were deficient in this one methylation, they were more likely to create errors in protein building. But not just any protein, the deficient tRNAs were particularly prone to mistakes at building proteins that sit within cell membrane.

This result made Hou think that perhaps a defect in the tRNA methylation might affect not only the bacteria’s toxin-pump, but a host of other types of proteins that help keep the membrane stable and cohesive.

In this paper, together with first author postdoctoral fellow Isao Masuda and others, Hou tested whether these defective tRNAs could make bacteria more susceptible to antibiotics, by creating bacteria that are genetically deficient in making the methyl-group decoration.

Through an elegant series of experiments, Hou’s team showed that these bacteria had membranes that were less cohesive and more permeable than normal. The bacteria with defective tRNAs were less effective at pumping out chemicals relative to the normal bacteria, suggesting that their toxin pumps were affected. Finally the team showed that when the bacteria with defective tRNAs were exposed to various antibiotics, they died faster and were also less capable of developing drug resistance.

“Speed of killing is important in antibiotics,” said Hou. “The longer it takes for bacteria to die from antibiotics, the more likely they are to develop resistance.”

While pharmaceutical companies such as AstraZeneca and GSK have discovered compounds that can inhibit the enzyme from making the critical methylation on tRNAs, progress has stalled. The primary reason is that the inhibitors are unable to permeate through the bacterial membrane structure, which resonates with the major challenge confronting the entire field of antibiotic discovery.

Hou acknowledges the challenge. “First, we need to formulate the inhibitors in such a way as to be able to enter the cell more effectively,” said Hou. “Then, combining these inhibitors with traditional antibiotics to kill bacteria faster and reduce the likelihood of antibiotic resistance.”

At the moment, there are no drugs that can effectively attack this pathway. Hou’s lab is currently working on developing better inhibitors.