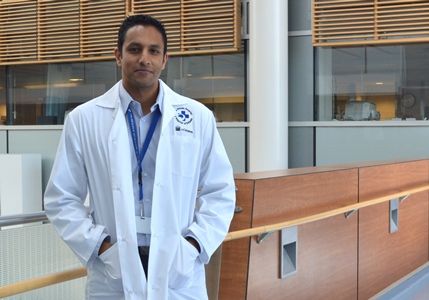 Are we using biologic therapy properly?

The introduction of infliximab (Remicade), the first biologic therapy approved for the treatment of inflammatory bowel diseases (IBD), did not result in lower rates of hospitalizations or intestinal surgeries among patients living with IBD in Ontario, according to a study published by authors from several Canadian hospitals and ICES in the journal Gut.

The authors studied trends in hospitalizations, surgeries and drug costs among individuals with Crohn’s disease and ulcerative colitis, collectively termed IBD, living in Ontario between 1995 and 2012. They compared trends following the introduction of infliximab in Ontario to trends that would have been expected had the drug not been introduced.

Infliximab is a type of anti-immune (anti-TNF) therapy that blocks inflammation in the gut and other organs. It is used to treat a variety of inflammatory diseases and became available in Ontario for Crohn’s disease in 2001 and for ulcerative colitis in 2006.

The researchers found that even among people with Crohn’s disease who received infliximab, there were no significant reductions in disease-related hospitalization or surgery rates compared to what would have been expected with conventional therapies alone. People with ulcerative colitis who received infliximab also did not experience lower surgery rates, but they did see some improvement in hospitalization rates following infliximab introduction.

“These findings are disappointing for a class of therapy that has demonstrated benefit in reducing IBD-related hospitalizations and surgeries in clinical trials,” said Sanjay Murthy, MD, FRCPC, lead author on the study and an IBD specialist and associate scientist at The Ottawa Hospital. “We had expected to see larger declines in these adverse health events because they are more common in IBD patients with severe disease, and these are the same patients that we should be targeting with this therapy early in their disease to prevent hospitalizations and surgeries.”

The study did not take into account the impact of this therapy on other important health outcomes, such as quality of life or workplace attendance and productivity.

“Clinicians have seen how anti-TNF therapy can dramatically improve their patients’ symptoms, and in many cases even lead to complete bowel healing,” said Murthy, who is also an assistant professor at the University of Ottawa. “But even though the drug clearly helps some individuals, we are not seeing some of the important benefits we would expect at a broader population level. This suggests that we may need to improve how we are using this drug in clinical practice to realize greater benefits.”

The researchers estimate that 25 percent of patients with Crohn’s disease and eight percent of patients with ulcerative colitis would have received infliximab by the end of their study follow-up. Anti-TNF therapies are substantially more expensive than conventional therapies for IBD – as a class, they make up the highest proportion of public drug program spending in Canada, at 8.7 percent.

The researchers hypothesize that selecting the wrong patients, delaying the start of treatment either by not recognizing disease severity or through poor access to treatment, and incorrectly optimizing drug dosage could all be factors limiting the real-world impact of anti-TNF therapy at a population level. Criteria for reimbursement through public or private health insurance may also limit timely access to the therapy.

However, the researchers also noted persistent declines in hospitalization and intestinal surgery rates across the IBD population well before the introduction of infliximab, suggests that improvements in traditional care were already having a significant impact. In addition, annual bowel resection rates among IBD patients were already low in Ontario at the time that infliximab was introduced – about four percent for Crohn’s disease patients and two per cent for ulcerative colitis patients – which may have left little room for further improvement.

“While it may be disappointing that this therapy did not impact IBD hospitalization or surgery rates across Ontario, this doesn’t mean that it is not impacting individual patients,” said Murthy. “Further research is needed to study quality of life and workplace productivity to capture the full breadth of the effects of this treatment in Ontario and in other provinces. However, our findings suggest that further education of clinicians and patients is needed before this therapy can realize its full potential.”