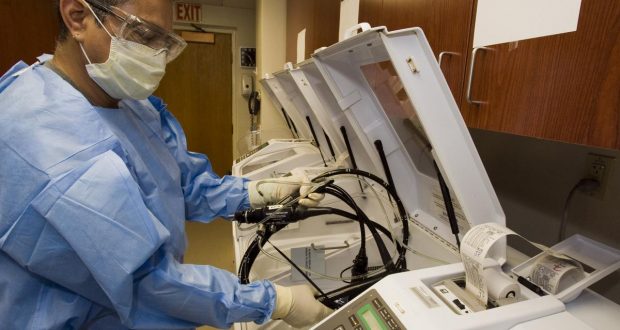 After the colonoscopy, gastroenterology tech Jose Rodriguez cleans and disinfects the colon scope using several steps including treating in a high level disinfectant machine. The colon scopes are serial numbered which allows an individual piece of equipment to be linked to a specific patient so records can be maintained and testing documented. ///ADDITIONAL INFO //// david.colonoscopy.jah -- shot 3/14/12 -- /// The recommended age for a first colonoscopy has dropped from 50 to 45 and fewer than 50 percent of Americans have had one. On March 14, 2012, Register columnist David Whiting had the procedure at Saddleback Memorial Medical Center in Laguna Hills.

The Air Force Academy is notifying 267 patients of the school’s medical clinic and the Veterans Affairs Eastern Colorado Health Care System that they are at risk for a number of infectious diseases due to improperly sterilized endoscopy equipment.

The patients all underwent gastrointestinal endoscopy procedures — either colonoscopies or enteroscopies — with endoscopes that were properly sanitized but not correctly processed beforehand during the required pre-cleaning protocol.

The risk of infection to patients is low but it is “not zero,” Air Force Academy command surgeon Col. Walter Matthews said.

“[The risk] cannot be discounted entirely.” Mathews said. “We take any potential risk to patient safety very seriously and are committed to informing those under our care of any increased risk.”

According to the Air Force, all patients who had a GI endoscopy at the clinic from June through September will be contacted by their Air Force or VA provider and offered testing for a number of diseases associated with contaminated medical equipment, to include infections, HIV and hepatitis.

Of the 267 patients, 206 were under the care of USAFA’s Medical Clinic and the remaining 61 patients are affiliated with the VA.

While the incident is the first public case in recent years of improperly sanitized equipment at a Defense Department facility, the Veterans Affairs Department has had a number of high-profile scandals involving dirty endoscopes. Between 2003 and 2008 in Murfreesburo, Tennessee, in 2008 in Augusta, Georgia, and from 2004 to 2009, in Miami, 11,000 veterans underwent endoscopic procedures with unsterilized equipment, placing them at risk for cross-contamination.

As a result, at least five veterans tested positive for HIV, 25 contracted hepatitis C and eight developed hepatitis B.

Air Force officials stressed that the equipment at their clinic was properly disinfected but a step in the pre-cleaning process was omitted. All 19 scopes were examined after the lapse was discovered and found to be free of any infectious material.

According to an Air Force press release, the clinic has placed all GI endoscopy procedures on hold pending an investigation and will retrain and recertify technicians on proper cleaning techniques.

Patients with questions or concerns are asked to contact the Air Force Academy GI Clinic directly at 719-333-5140.