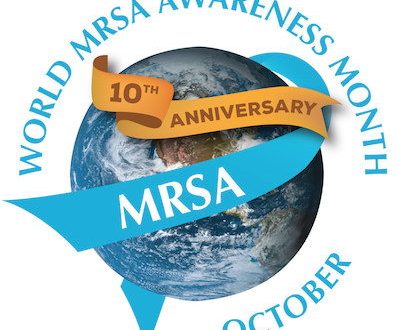 The ongoing MRSA epidemic continues to be a major global threat and MRSA emerged into the world over fifty years ago. Methicillin-resistant staphylococcus aureus (MRSA) bacterium spread and mutated for decades throughout Europe and other continents, which has had a devastating and fatal effect on patients in healthcare facilities worldwide and now in the community. World MRSA Awareness Month, October and World MRSA Day, October 2 are annual observances to raise awareness and the United States Senate passed a senate resolution in 2009 designating these dates.

The Global theme for World MRSA Awareness Month is “The MRSA Epidemic – A Call to Action”. International Infection Prevention Week is October 16-22, 2011.

The 3rd Annual World MRSA Day kickoff event on October 1, 2011 at Loyola University Stritch School of Medicine was a huge success and is building every year. The community and healthcare industry came together to raise awareness for MRSA and the event was watched live via web stream around the world by thousands. Dr. William R. Jarvis, a world-renowned MRSA and infectious disease specialist and formerly with the Centers for Disease Control and Prevention (CDC) was Keynote Speaker. Monica E. Oduber, an Aruban artist exhibited her three MRSA paintings at the October 1, 2011 event and is the first to draw worldwide attention to the MRSA epidemic and to the human suffering from MRSA infections through art.

Downloadable posters, web banners, a brochure and e-card can be found at the World MRSA Day web site to help raise awareness. Events are being held throughout the month of October in the United States and the United Kingdom in hospitals, universities, churches and community centers.

The World Health Organization (WHO) and the Centers for Disease Control and Prevention (CDC) must immediately develop and implement a MRSA surveillance and reporting system for all countries, collect MRSA infection and colonization data and release the data so the true magnitude of the MRSA global epidemic can become apparent worldwide. Transparency is imperative.

This year the Veteran’s Administration (VA) Healthcare System reported the results of their MRSA intervention. Through the use of active detection and isolation (ADI), a large number of VA hospitals nationwide were able to significantly reduce MRSA colonization and infection and save many lives. Thus, similar to previous data reported by Evanston Hospital, universal screening of admissions for MRSA combined with placing MRSA-colonized or infected patients in contact isolation, reinforcing hand hygiene and environmental cleaning significantly reduces MRSA infections. Given that nearly 20,000 persons who die of invasive MRSA infections in U.S. healthcare facilities each year, how long will health officials wait until ADI is mandated for the control of MRSA in healthcare facilities in the U.S. and worldwide?