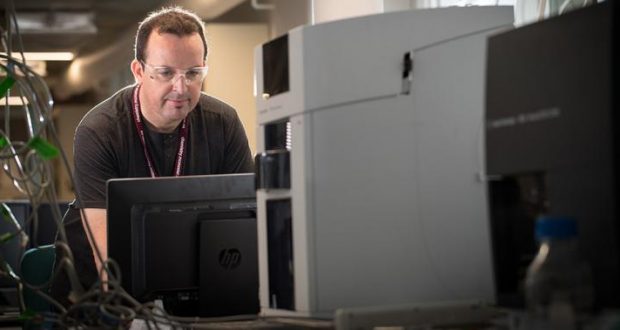 Philip Britz-McKibbin, lead author of the study and a professor in McMaster's Department of Chemistry & Chemical Biology. Photo by JD Howell, McMaster University

Scientists at McMaster University have identified new biomarkers for irritable bowel syndrome (IBS) in urine, which could lead to better treatments and reduce the need for costly and invasive colonoscopy procedures currently used for diagnosis.

Little is known about the causes of IBS, a chronic and often debilitating gastrointestinal disorder which affects hundreds of thousands of Canadians in which diagnosis is complicated, patients experience a vast spectrum of symptoms and treatment options are limited.

“Diagnostic testing for IBS involves a long process of excluding other related gut disorders, such as inflammatory bowel disease,” explained Philip Britz-McKibbin, lead author of the study and a professor in McMaster’s Department of Chemistry and Chemical Biology.

“We were interested in finding if there is a better way to detect and monitor IBS that avoids invasive colonoscopy procedures while also giving us better insights into its underlying mechanisms,” he said.

Researchers performed metabolite profiling studies comparing urine samples from a cohort of IBS patients with a control group of healthy adults. They discovered for the first time distinctive metabolic signatures that were elevated in the IBS patients. Several metabolites were related to collagen degradation, which researchers believe is derived from the gut, suggesting there is an impairment of the elastic lining in the colon impacting its normal function.

Researchers believe the findings might also allow for routine treatment monitoring of IBS patients that can also be used to validate the efficacy of dietary and/or pharmacological interventions.

Currently, they are expanding their work to discover new biomarkers in urine that can differentiate Crohn’s disease from ulcerative colitis in children, hoping they can avoid future colonoscopies altogether. This may allow for rapid screening and early detection of various chronic gut disorders more accurately and at a lower cost.