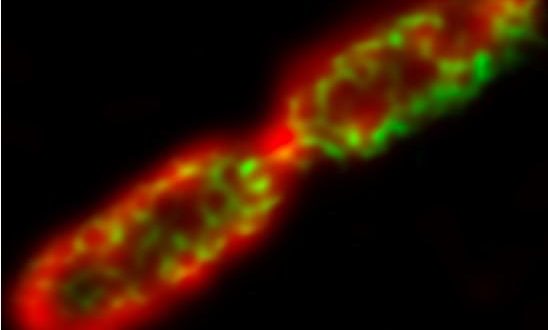 Gram negative bacteria. Image provided by the University of Sheffield

A new compound which visualizes and kills antibiotic resistant superbugs has been discovered by scientists at the University of Sheffield and Rutherford Appleton Laboratory (RAL).

The team, led by Professor Jim Thomas, from the University of Sheffield’s Department of Chemistry, is testing new compounds developed by his PhD student Kirsty Smitten on antibiotic resistant gram-negative bacteria, including pathogenic E. coli.

Gram-negative bacteria strains can cause infections including pneumonia, urinary tract infections and bloodstream infections. They are difficult to treat as the cell wall of the bacteria prevents drugs from getting into the microbe.

Antimicrobial resistance is already responsible for 25,000 deaths in the EU each year, and unless this rapidly emerging threat is addressed, it’s estimated by 2050 more than 10 million people could die every year due to antibiotic resistant infections.

Doctors have not had a new treatment for gram-negative bacteria in the last 50 years, and no potential drugs have entered clinical trials since 2010.

The new drug compound has a range of exciting opportunities. As professor Jim Thomas explains, “As the compound is luminescent it glows when exposed to light. This means the uptake and effect on bacteria can be followed by the advanced microscope techniques available at RAL.

“This breakthrough could lead to vital new treatments to life-threatening superbugs and the growing risk posed by antimicrobial resistance.”

The studies at Sheffield and RAL have shown the compound seems to have several modes of action, making it more difficult for resistance to emerge in the bacteria. The next step of the research will be to test it against other multi-resistant bacteria.

In a recent report on antimicrobial resistant pathogens, the World Health Organization put several gram-negative bacteria at the top of its list, stating that new treatments for these bacteria were ‘Priority 1 Critical’ because they cause infections with high death rates, are rapidly becoming resistant to all present treatments and are often picked up in hospitals.

The research, published in the journal ACS Nano, describes the new compound which kills gram-negative E. coli, including a multidrug resistant pathogen said to be responsible for millions of antibiotic resistant infections worldwide annually.