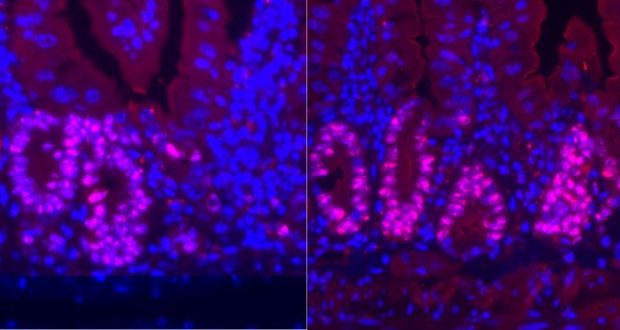 Dramatic calorie restriction, diets reduced by 40 percent of a normal calorie total, have long been known to extend health span, the duration of disease-free aging, in animal studies, and even to extend life span in most animal species examined. Further research has shown that animals fed restricted-calorie diets are also better able to regenerate numerous tissues after injury.

A lingering question has been how these benefits are mediated. A new study led by University of Pennsylvania researchers pinpoints the cell responsible for these improved regenerative abilities in the intestines. According to the scientists’ work, when a calorie-restricted mouse is subjected to radiation, a particular type of stem cell in the intestines, known as reserve stem cells, can survive and quickly rebuild intestinal tissues. The findings align with observations by oncologists that short-term fasting prior to chemotherapy can mitigate the severity of gastrointestinal destruction.

“The moral of the story is you definitely don’t want to be eating a bunch of cheeseburgers before you get chemotherapy or radiation,” said Christopher Lengner, an associate professor in Penn’s School of Veterinary Medicine. “Our work is pointing to reserve stem cells as being the critical players in conferring the benefits of intestinal-tissue regeneration after these types of insults.”

Lengner collaborated on the work with lead author Maryam Yousefi, a graduate student in the Cell and Molecular Biology program at Penn Medicine and a Howard Hughes Medical Institute International Student Fellow, and other colleagues from Penn and China Agricultural University. Their work appears in the journal Stem Cell Reports.

Years of research have demonstrated that existing on a calorie restricted diet, while seemingly unpleasant, can boost healthy lifespan, reducing the risk of heart attack, diabetes and other age-related conditions. Other, more recent work has shown that calorie-restricted animals regenerate tissue more effectively following injury.

“The beneficial effects of calorie restriction are at this point not really up for debate; it’s quite clear,” Lengner said. “But there are all sorts of questions about the cellular and molecular basis to these benefits.”

One theory has been that calorie restriction slows age-related degeneration and enables more efficient tissue function by influencing the integrity and activity of adult stem cells, the precursor cells that dwell within specific tissues and give rise to the diversity of cell types that compose that tissue.

In prior work, Lengner’s lab has studied how certain stem cells in the intestines resist DNA damage. Perhaps, the researchers reasoned, calorie restriction is somehow targeting these stem cells to enhance their ability to resist damage.

Recent studies focused on the effects of calorie restriction on the active intestinal stem cells. While these active stem cells bear the burden of daily tissue turnover and act as the workhorses of intestinal function, they are also known to be highly susceptible to DNA damage, such as that induced by radiation exposure, and thus are unlikely to be the cells mediating the enhanced regeneration seen under calorie restriction, the Penn team reasoned.

To investigate this hypothesis, the scientists focused on how a subpopulation of mouse intestinal stem cells responded under calorie restriction and then when the animals were exposed to radiation.

When mice were fed a diet reduced in calories by 40 percent from normal, the researchers observed that reserve intestinal stem cells expanded five-fold. Paradoxically, these cells also seemed to divide less frequently, a mystery the researchers hope to follow up on in later work.

When the research team selectively deleted the reserve stem cells in calorie-restricted mice, their intestinal tissue’s regeneration capabilities were cut in half, implicating these cells as having an important role in carrying out the benefits of calorie restriction.

“These reserve stem cells are rare cells,” Lengner said. “In a normal animal they may make up less than half a percentage of the intestinal epithelium and in calorie restricted animals maybe slightly more. Normally, in the absence of injury, the tissue can tolerate the loss, due to the presence of the active stem cells, but, when you injure the animal, the regeneration is compromised and the enhanced regeneration after calorie restriction was compromised in the absence of the reserve stem cell pool.”

To tease out the mechanism by which these cells were acting, the researchers compared the genes that were turned on in normal versus calorie-restricted animals.

“It was very obvious,” Lengner said. “These reserve stem cells that we had shown were important for the beneficial effects of calorie restriction, were repressing many pathways that are all known to be regulated by the protein complex mTOR, which is most well known as being a nutrient-sensing complex.”

The finding made intuitive sense; researchers studying other tissue types had shown that activating mTOR can drive dormant cells out of quiescence, a necessary step for regeneration. Here, researchers found that reserve stem cells had low mTOR activity, and this was even lower upon calorie restriction. Lower mTOR activity correlated with resistance to injury.

Yet in order to regenerate after the injury was over, these cells would need mTOR again.

“Curiously, we see that, when they’re injured, the calorie-restricted mice were actually better able to activate mTOR than their counterparts,” Lengner said. “So somehow, even though mTOR is being suppressed initially, it’s also better poised to become activated after injury. That’s something we don’t fully understand.”

The researchers, led by Yousefi, conducted experiments using leucine, an amino acid that activates mTOR, and rapamycin, a drug which inhibits mTOR, to confirm that mTOR acted within these reserve stem cells to regulate their activity. Reserve stem cells exposed to leucine proliferated, while those exposed to rapamycin were blocked.

Lengner cautions, however, that rapamycin cannot be used as a stand-in for calorie restriction, as it would linger and continue to block mTOR activation even following injury, hindering the ability of the reserve stem cells to spring into action and regenerate intestinal tissue.

“Rapamycin doesn’t do precisely what calorie restriction does,” he said. “Calorie restriction represses mTOR but is readily reversible upon injury. Not so with rapamycin, where persistant repression of mTOR after injury can impair the regenerative response. So for the time being, there is no magic pill that can mimic the effects of calorie restriction. If you want the benefits, you’ve got to cut the calories.”

In future work, the researchers hope to drill down deeper, looking beyond nutrient singaling to see what type of signaling molecules can modulate the activation of reserve stem cells.