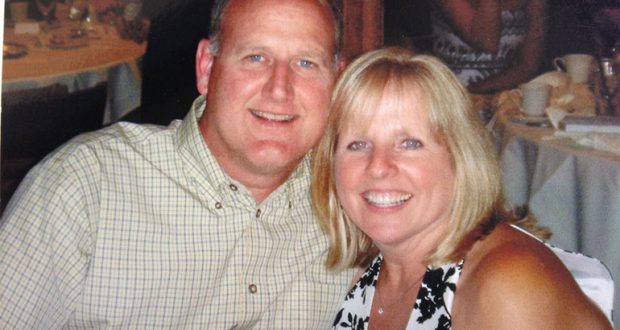 Theresa Bigler sued Olympus over the death of her 57-year-old husband, Richard, alleging he was infected by a contaminated scope. (Courtesy of the Bigler family)

A Seattle judge said Olympus Corp. failed to properly disclose internal emails that raised safety concerns about a redesigned medical scope as early as 2008, several years before the device was publicly tied to deadly superbug outbreaks.

Citing those “willful discovery violations” by the Japanese device giant, King County Superior Court Judge Steve Rosen ordered a new trial Tuesday in a wrongful death case brought by Theresa Bigler. The Seattle-area widow, whose case was the first to go to trial in the nationwide outbreaks, claimed that a tainted Olympus scope caused the infection that led to her husband’s death in 2013. The jury returned a mixed verdict, finding that the device’s design was not unsafe.

The emails from 2008 — which Olympus shared with the plaintiffs but were not translated from Japanese, as required — suggest that the company was aware of a potential design problem at least four years earlier than had been disclosed, even before the scope hit the market in 2010. The newly discovered emails could lend support to plaintiffs’ claims that it put sales ahead of patient safety.

More than 25 lawsuits against the scope maker have been filed nationally, most of them in Los Angeles and at least four in Washington state.

Richard Bigler, a 57-year-old who was receiving treatment for pancreatic cancer, was one of at least 35 patients in American hospitals to have died since 2013 after developing infections tied to Olympus duodenoscopes, which are snake-like tubes threaded down a patient’s throat to diagnose and treat problems in the digestive tract. About 700,000 such procedures are performed annually in the U.S.

At the initial Bigler trial last year, jurors rejected claims that the design of the company’s top-selling gastrointestinal scope hampered cleaning and declined to award punitive damages to the family. Instead, the jury ordered Olympus to pay the Seattle hospital involved $6.6 million in damages. In turn, the hospital, Virginia Mason Medical Center, had to pay the family $1 million.

“Olympus robbed the Bigler family of a full and fair trial. They hid the documents and hid the witnesses,” said plaintiff’s attorney David Beninger, whose team found the emails after an Olympus executive mentioned hospital tests during the first trial. “The family is grateful they will get another chance to hold Olympus accountable.

Olympus said it intends to appeal the judge’s ruling.

“We believe we were compliant with the Washington discovery rules,” the Tokyo-based company said in a statement. “The jury rightly found the Olympus TJF-Q180V duodenoscope design was not defective. This device remains the preferred choice of physicians and hospitals around the world.”

The judge’s order is a setback for the Japanese manufacturer, which has tried for years to win back public trust after a $1.7 billion accounting scandal marred the company’s reputation in 2012. The scope-related outbreaks have sparked renewed scrutiny of the company’s conduct.

In 2016, Olympus recalled its TJF-Q180V duodenoscopes and made repairs to reduce the risk of contamination.

Until now, federal investigations and patient lawsuits into the scope outbreaks have focused more on a warning issued in 2012 by an independent expert who concluded that the scope’s design could allow blood and tissue to become trapped, spreading bacteria from one patient to the next. Olympus emails from 2013, in which executives rejected the idea of a broad warning to U.S. hospitals about possible infections, played a prominent role at last year’s Bigler trial. The company issued a safety alert in Europe in 2013.

Although Olympus had turned over the documents in question to the plaintiffs as part of thousands of pages of pretrial discovery, the judge said the company failed to translate the documents — and flag the hospital test results in response to specific queries from the plaintiffs.

“The rules require that when you produce something under [court rules for interrogatories], it has to be in English,” Rosen said at a Nov. 2 hearing on potential discovery sanctions. “Otherwise, it becomes a very easy way, as a policy matter and a practical matter, to hide things.”

At that same hearing, the judge said “there was massive impropriety on Olympus’s part with regard to verification of discovery.”

Rosen ordered Olympus to pay the Bigler family $250,000 as a sanction as well as cover the plaintiff’s legal expenses for the new trial.

The new documents reveal for the first time that Olympus gave a scope prototype to several hospitals and doctors in Europe and the U.S. for a trial run before putting it on the market in 2010. Olympus controls about 85 percent of the U.S. market for gastrointestinal scopes, which can cost up to $40,000 apiece.

At one of those facilities, Oslo University Hospital in Norway, an unidentified nurse expressed concerns about being able to clean inside the tip of the reusable scope, Olympus internal emails show.

The nurse told the scope maker it would need to certify that the device could be easily cleaned and added: “‘You do want to sell these, right?’” according to an April 15, 2008, email by Masakazu Higashimoto, an Olympus research and development liaison in Germany.

This feedback sparked more messages among Olympus employees who worried that adding a cleaning brush would diminish the company’s upcoming sales pitch and delay the product launch. In 2010, in marketing brochures, Olympus touted its new scope as easier to clean because a crucial section of the device was sealed to keep bacteria out.

“I don’t want to actively market [the brush] since it makes it harder to make [a marketing] appeal based on the high level of cleanliness and ease of cleaning,” Olympus executive Naoya Shimada wrote in an April 18, 2008, email to Higashimoto and three other colleagues, which was filed in court. “I don’t want to have the risk of delaying the scope due to problems with the brush or a need to revise the specs,” Shimada added.

The brush wasn’t included at the product’s launch. Only after superbug outbreaks in the Netherlands, Seattle, Pittsburgh and Los Angeles did Olympus issue a 2015 safety alert advising U.S. customers to use a similar brush.

Lars Aabakken, chief of gastrointestinal endoscopy at Oslo University Hospital, said he doesn’t recall testing the Olympus prototype. But “it does not sound implausible that our nurses may have raised this question, given the quite substantial change” from the previous Olympus model in Europe, which had a removable cap that offered better access for cleaning areas that could harbor dangerous bacteria, he said.

Several U.S. medical centers are listed in translated company documents as participating in the evaluation of the scope prototype around 2008, according to the plaintiffs’ ongoing review and translation of Olympus documents. They include the Cleveland Clinic, Beth Israel Deaconess Medical Center in Boston, Indiana University, the University of Virginia and Thomas Jefferson University Hospital in Philadelphia. It’s unclear what feedback, if any, those hospitals gave Olympus as company documents continue to undergo translation.

In 2013, Thomas Jefferson had eight patient infections tied to contaminated Olympus duodenoscopes, according to a U.S. Senate investigation released in 2016. A hospital spokeswoman, Gail Benner, said, “We have not identified any records indicating that Jefferson conducted formal testing of the Olympus TJF-Q180V duodenoscope.”

Cleveland Clinic declined to comment, citing the ongoing litigation. The other hospitals didn’t respond to requests for comment.

The Seattle judge also found that Virginia Mason committed a discovery violation by not providing a spreadsheet containing scope test results to Olympus. An attorney for the hospital said the material had been provided as required.

Kaiser Health News (KHN) is a national health policy news service. It is an editorially independent program of the Henry J. Kaiser Family Foundation which is not affiliated with Kaiser Permanente.