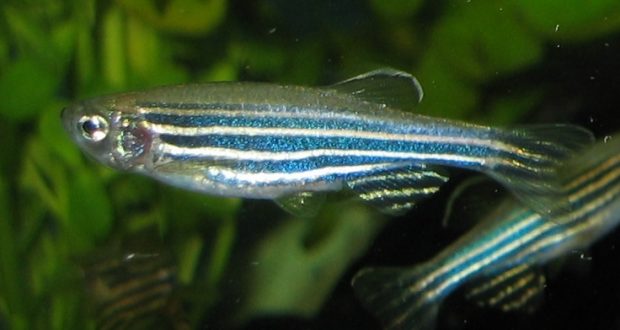 Impacts of low-dose exposure to antibiotics unveiled in zebrafish gut

The study, published this week in the Proceedings of the National Academy of Sciences, applied three-dimensional microscopy to nearly transparent zebrafish to show how weak levels of antibiotics induce structural changes in gut bacterial communities that cause severe drops in the bacterial populations.

“Low levels of antibiotics are often found as environmental contaminants, for example from widespread use in raising livestock,” said Raghuveer Parthasarathy, a professor of physics and member of the UO’s Institute of Molecular Biology. “It’s known that weak antibiotics can dramatically alter the human gut microbiome, but why this happens has been a mystery.”

Zebrafish larvae are a good model for tackling the mystery, Parthasarathy said, because they share many anatomical similarities with humans and other vertebrates, and their intestinal microbes can be directly observed.

Doctoral student Brandon H. Schlomann and postdoctoral researcher Travis J. Wiles led the project, in which larvae were observed with 3D microscopy as they were exposed to concentrations of the antibiotic ciprofloxacin at levels comparable to that often found in environmental samples.

The researchers looked separately at zebrafish carrying one of two different bacterial species that are each frequently found in the zebrafish gut. Bacteria of one of the species are motile and fast-swimming. Bacteria of the other species are almost completely aggregated in dense colonies.

In the presence of the antibiotic, both types of bacteria showed dramatic changes in their behavior. The normally motile species became much slower and formed aggregates. The normally aggregated species shifted in structure to form even larger colonies, with less fragmentation.

In both cases, the enhanced aggregation made the bacteria more sensitive to the mechanical contractions of the intestines, leading to increased expulsion from the gut and more than hundred-fold drops in the intestinal populations.

“Our findings,” Parthasarathy said, “suggest that because of the physical activity of the intestine, contamination by antibiotics induces much larger changes to the gut microbiome than one would suspect from simply studying bacteria alone. In a sense, the gut amplifies the effects of weak antibiotics.”

Based on their observations, the researchers developed a mathematical model of bacterial dynamics in the gut, with predictions for colony sizes that matched experimental data. The model is similar to those of polymer and microparticle growth, showing, the co-authors write, that methods developed in physics can be fruitfully applied to studies of the gut microbiome.

Parthasarathy expects the team’s findings to apply to more than zebrafish.

“A wide range of bacteria respond to weak antibiotics by changing their shape and aggregation behaviors,” he said. “All vertebrate intestines — humans’ included — transport food and microbes, and their mechanics drive the motion of bacterial groups. We suspect, therefore, that the things we’ve discovered are quite general across species, including humans and other animals.”

The model, Parthasarathy and colleagues write, provides a framework for evaluating antibiotic perturbations in humans and other animals. The five-member team suggests that the expulsion of live antibiotic-exposed bacteria from animal intestines through the aggregation-based process may be a mechanism for the spread of antibiotic resistance.