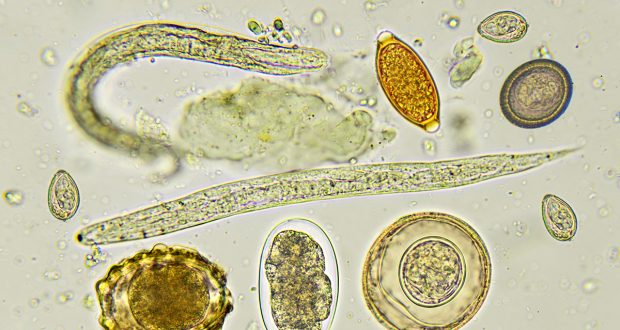 A new study indicates that the kinds of microbes living in the gut influence the severity and recurrence of parasitic worm infections in developing countries. The findings, by researchers at Washington University School of Medicine in St. Louis, suggest that manipulating the gut’s microbial communities may protect against intestinal parasites, which affect more than 1 billion people worldwide.

The study appears online in the journal Microbiome.

“People who have sustained infections or who experience multiple infections have a different microbiome to start with compared with those who do not have as much trouble with infection,” said senior author Makedonka Mitreva, PhD, an associate professor of medicine. “Our work included samples from a placebo-controlled trial of drugs against these parasitic worms. It suggests that the microbiomes of people who retained infection are somehow compromised to begin with. Something about their microbiomes makes them more prone to getting infected and to maintaining a chronic infection.”

According to the World Health Organization, about one quarter of the world’s population — over 1.5 billion people — is infected with parasitic worms called helminths. These worm infections are most common in tropical and subtropical areas with poor sanitation.

The researchers, including first author Bruce A. Rosa, PhD, a staff scientist, analyzed about 400 fecal samples from 250 people living in different villages in Liberia and Indonesia. Mitreva said one of the study’s strengths is that it established common gut microbiome patterns associated with high and low risk of worm infections in two distant geographic regions — West Africa and Southeast Asia, where such infections are prevalent.

The infections spread easily when soil is contaminated with human feces that contain worm eggs. Children are particularly vulnerable because the infections can cause malnutrition, leading to impaired growth and development. Even when infections are treated with appropriate drugs, they often recur because the infective stages of the parasite are ever present in the soil. The main species that affect human health are large roundworm, whipworm and hookworm.

“There are good drugs against most — but not all — of these infections. We are beginning to see more responses to treatment that are less than optimal, indicating the worms are starting to develop resistance to some of these treatments,” said Mitreva, also an assistant director of the university’s McDonnell Genome Institute. “The big problem is reinfection. Even if the therapy works and the infection is cleared, the exposure to contaminated soil is so pervasive that new infections are extremely common. Building on the information from this study, our ultimate long-term goal is to develop a way to alter the gut microbiome so that it protects people from reinfection.”

Currently, antihelminthic drugs are used to deworm people who are infected, especially school-age children and women of reproductive age. Since the study found characteristics of the microbiome that are discriminative of infection, Mitreva said this information could be used to predict who is most likely to develop severe and chronic infections and direct more preventive efforts to those individuals.

“Ideally, we would like to be in a position to suggest some local fermented foods that could alter the microbiome and result in a decreased rate of reinfection,” Mitreva said. “Rather than give more antihelminthic drugs, we want to help people fight off the infection by themselves. Right now, we are looking at the bacteria that we found were associated with protection against infection and studying their effects in mice with intestinal worm infections.”’