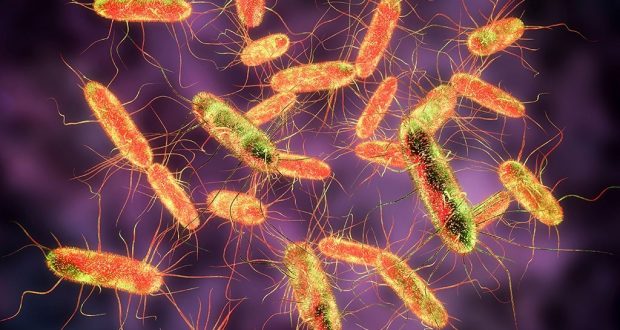 Researchers at the Stanford University School of Medicine have identified a molecule that serves as natural protection against one of the most common intestinal pathogens.

Propionate, a byproduct of metabolism by a group of bacteria called the Bacteroides, inhibits the growth of Salmonella in the intestinal tract of mice, according to the researchers. The finding may help to explain why some people are better able to fight infection by Salmonella and other intestinal pathogens and lead to the development of better treatment strategies.

A paper describing the work was published July 26 in Cell Host and Microbe.

The researchers determined that propionate doesn’t trigger the immune response to thwart the pathogen. Instead, the molecule prolongs the time it takes the pathogen to start dividing by increasing its internal acidity.

Salmonella infections often cause diarrhea, fever and abdominal cramps. Most people recover within four to seven days. However, the illness may be severe enough to require hospitalization for some patients. Salmonella causes about 1.2 million illnesses, 23,000 hospitalizations and 450 deaths nationwide each year, according to the Centers for Disease Control and Prevention. Most cases are caused by contaminated food.

“Humans differ in their response to exposure to bacterial infections. Some people get infected and some don’t, some get sick and others stay healthy, and some spread the infection while others clear it,” said Denise Monack, PhD, professor of microbiology and immunology and the senior author of the paper. “It has been a real mystery to understand why we see these differences among people. Our finding may shed some light on this phenomenon.”

For years, scientists have been using different strains of mice to determine how various genes might influence susceptibility to infection by intestinal pathogens. But this is the first time that researchers have looked at how the variability of gut bacteria in these mice might contribute to their different responses to pathogens.

“The gut microbiota is an incredibly complex ecosystem. Trillions of bacteria, viruses and fungi form complex interactions with the host and each other in a densely packed, heterogeneous environment,” said Amanda Jacobson, the paper’s lead author and a graduate student in microbiology and immunology. “Because of this, it is very difficult to identify the unique molecules from specific bacteria in the gut that are responsible for specific characteristics like resistance to pathogens.”

From mice to men

The scientists started with an observation that has been recognized in the field for years: Two inbred strains of mice harbor different levels of Salmonella in their guts after being infected with the pathogen. “The biggest challenge was to determine why this was happening,” Jacobson said.

First, they determined that the differences in Salmonella growth could be attributed to the natural composition of bacteria in the intestines of each mouse strain. They did this by performing fecal transplants, which involved giving mice antibiotics to kill off their usual composition of gut bacteria and then replacing the microbial community with the feces of other mice, some of whom were resistant to Salmonella infection. Then, the researchers determined which microbes were responsible for increased resistance to Salmonella infection by using machine-learning tools to identify which groups of bacteria were different between the strains.

The scientists examined their Salmonella model for the potential impact of propionate on the immune system but found that the molecule had a more direct effect on the growth of Salmonella. Propionate acts on Salmonella by dramatically decreasing its intracellular pH and thus increasing the time it takes for the bacterium to start dividing and growing, the study found.

“Collectively, our results show that when concentrations of propionate, which is produced by Bacteroides, in the gut are high, Salmonella are unable to raise their internal pH to facilitate cellular functions required for growth,” Jacobson said. “Of course, we would want to know how translatable this is to humans.”

Reducing the impact of salmonella

“The next steps will include determining the basic biology of the small molecule propionate and how it works on a molecular level,” Jacobson said. In addition, the researchers will work to identify additional molecules made by intestinal microbes that affect the ability of bacterial pathogens like Salmonella to infect and “bloom” in the gut. They are also trying to determine how various diets affect the ability of these bacterial pathogens to infect and grow in the gut and then shed into the environment. “These findings will have a big impact on controlling disease transmission,” Monack said.

The findings could also influence treatment strategies. Treating Salmonella infections sometimes require the use of antibiotics, which may make Salmonella-induced illness or food poisoning worse since they also kill off the “good” bacteria that keep the intestine healthy, according to Monack. Using propionate to treat these infections could overcome this limitation. “Reducing the use of antibiotics is an added benefit because overuse of antibiotics leads to increased incidence of antibiotic-resistant microbes,” Monack said.ociate professor of bioengineering and of microbiology and immunology. 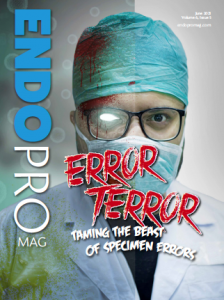