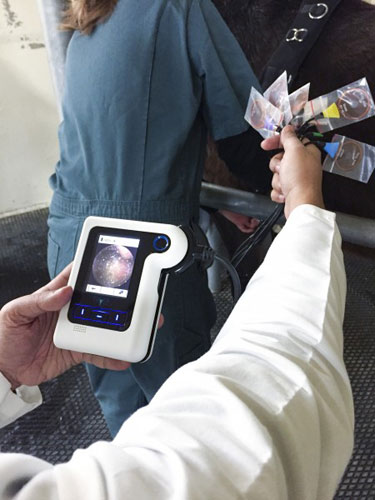 In the somewhat cheesy 1966 film, Fantastic Voyage, a miniaturized submarine (likely most notable for having Raquel Welch among its crew) undertakes a dangerous mission: to cruise through the body of its designer in order to destroy a life-threatening blood clot in his brain.

The special effects were a little more sophisticated in 1987’s quasi-remake, Innerspace, in which Dennis Quaid pilots a microscopic pod around in Martin Short’s innards, even if the dialogue was not. And then there was the 2001 animated effort, Osmosis Jones, a bit of a box-office bomb despite a voice cast that included Chris Rock, Bill Murray, David Hyde Pierce, Molly Shannon, and Laurence Fishburne, playing interior anatomical investigation for laughs.

One thing is obvious: the notion of exploring a body from the inside, Jules Verne-style, isn’t going away.

We’re getting closer all the time to being able to do it, too. Maybe not with miniaturized humans on board, but we’ve now got the next best thing: a small, smart, sophisticated capsule endoscope (CE) which can be gently introduced to the digestive tract to take a cruise, snap some photos, and grab a few souvenirs along the way.

Capsule endoscopes have been in use in human medicine for about a decade now. Of course, we’ve had ‘regular’ endoscopes for even longer than that – the kind where a cable is snaked down the eosophagus and examines as far as it will go – but they have limitations. Even in the human gastrointestinal tract (GI), there are limits to how far we can explore with a conventional endoscope, leaving much of the twisty, turny small intestine out of reach.

A capsule endoscope, by contrast, can traverse the digestive system tetherless and fancy free, shoved ever onward by peristalsis, the natural rhythm of contractions that moves food from stomach to intestines and thence to elimination. In humans, the tiny capsules, averaging about 1 cm by 2.5 cm in size (depending on the manufacturer) are proving useful in detecting otherwise-hard-to-diagnose things such as lesions, tumours, Crohn’s and celiac disease, and mystery bleeding in the small intestine. There have been over a thousand peer-reviewed articles published since the early 2000s, all of which have concluded that capsule endoscopy is non-invasive and safe (but not, so far, re-useable).

It was only a matter of time before CE started being applied to the equine digestive tract. Conventional endoscopy is limited by the length of the ‘scope (usually somewhere between 2.2 and 2.5 metres long) – which isn’t that useful when you’re talking about a mass of tubes with a total length of 24 to 30 metres.

The sheer length and mass of the equine GI tract, combined with the way it’s shielded by thick walls of abdominal muscle, also make other diagnostic methods problematic. Ultrasound can’t penetrate the abdominal wall and the ribcage all that well, and MRI and CT have similar limitations. The conventional approach, rectal palpation, also only allows access to the last 30 to 40 per cent of the GI tract. Neither the stomach, the proximal duodenum, nor any part of the small intestine can be explored that way.

So while conventional endoscopes have had good success in illuminating gastric ulcers – and if inserted at the other end, can provide a view of the first metre or two of the large intestine – the small intestine remains a “black box”, according to Diane Gibbard, MS, who in September 2015 completed a Masters’ degree at the University of Guelph by presenting her thesis on the applications of capsule endoscopy in horses.

Her desire to investigate CE – which had previously only been applied on the veterinary side in a scant few studies on dogs and pigs – stemmed from personal experience: her first horse was suffering intermittent bouts of mild colic which defied diagnosis. Gibbard’s veterinarian suggested they try capsule endoscopy, which he had used experimentally once before – but unfortunately, the trial “failed miserably”, she says. “I thought, there has to be a way to make this work in horses,” so she approached her faculty advisor, Dr. Jeff Thomason, with the idea.

Gibbard began with one of the capsule endoscope models popular in human medicine, MiroCam©, and worked with the company’s engineers to adapt the technology for use in horses. Because of the sheer size of the patient, the capsule needed to have enhanced signal strength with which to send its images to a series of electrodes placed on the horse’s skin. Initially, those electrodes – nine in all – were taped to the skin as they are with humans, but Gibbard’s team soon discovered that sub-dermal electrodes did a better job of picking up the signal through a horse’s thick abdominal walls. Even then, the signal strength waxed and waned, and clear images only got transmitted when it surpassed 85 per cent. Through four trials each on two standardbred mares, Gibbard continued to make modifications to both the equipment and the methodology to improve the chances of success.

“In the final trial, the image transmission was much better. It’s very promising that we got such high-quality images… we saw peristalsis in action, we saw sites of inflammation, and one thing we didn’t expect at all, was clear images of parasites like tapeworms and pinworms. We got parasitologist Andrew Peregrine (University of Guelph) involved and he was over the moon, because those were the first clear images he’d ever seen of a live internal parasite ‘swimming’ in its natural environment.

“Just ‘unlocking’ the small intestine for the first time, was fascinating to me. Every time I watch the videos of the contraction and expansion that comes with peristalsis, I’m in awe.”

There were, of course, frustrations in using a technology adapted from human use. “A lot of the time, the signal transmission wasn’t good enough to get much of anything … and often when we did get images, they were partially or fully obscured by residual food particles in the GI tract, despite a 12 hour fasting protocol,” Gibbard says. “We think that a 24 fast might work better in future, but we have to balance that with compromising peristalsis, particularly because we also used sedation while introducing the capsule with a nasogastric tube. Most sedatives also interfere with peristalsis.

“It would also be great to know which leads are picking up the signal as the capsule makes its way through the gut. That would help us optimize the placement of the electrodes. We based their placement on human medicine, but it’s possible something else would work better for horses. Right now, we can’t tell exactly where in the small intestine the capsule actually is when a signal is transmitted, and that would be helpful in the identification of the images.”

Battery life is also an issue. The MiroCam © model used in Gibbard’s study remained active for about 12 hours, which with normal peristalsis is enough for it to scan most or all of the small intestine, she said. That peristalsis was encouraged with fluid boluses throughout the 12-hour period, and regular feeding of soaked hay cubes.

All told, both mares experienced minimal stress while having miniature cameras cruise through their guts, and recovered without incident. Though the team searched (and one mare was euthanized and her GI tract thoroughly explored afterwards), none of the eight capsules was ever recovered, though Gibbard suspects they probably passed out of the mares beyond the seven-day period in which their manure was collected and searched.

Gibbard’s conclusion was that CE is not ready for commercial veterinary use just yet – but it’s close. “It’s quite non-invasive, so I could see it being used on-farm in future,” she says. “I’m guessing at this point, but it would probably end up costing somewhere in the $2,000 to $3,000 range – so, not something you would use every day, but considerably cheaper than colic surgery.”

As for next steps, Gibbard would like to try CE on a pony. “One of our test horses was quite a bit smaller than the other, and we consistently got better results with the smaller mare, so size may matter,” she says. “I would also like to increase the fasting protocol to 24 hours, to see how it affects image capture.

“I think the potential for (CE to perform) tissue biopsy is really interesting. That’s something that’s starting to be explored in human medicine, along with capsule endoscopes which could be controlled and ‘steered’ so that you can take more detailed images of a particular area, for example, or even go back to get a better look at something suspicious.”