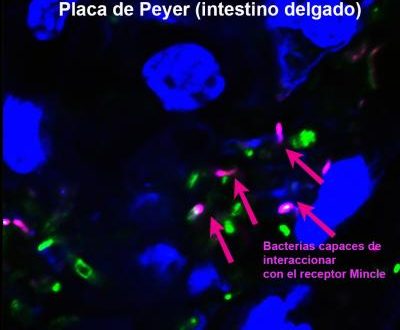 The result opens new avenues for the treatment of disorders such as ulcerative colitis or Crohn's disease./Salvador Iborra

An international study led by the Complutense University of Madrid (UCM) and the National Centre for Cardiovascular Research (CNIC) has found that  present in the intestinal microbiota interact with immune system cells to strengthen the intestinal barrier.

Conducted on mice and published in Immunity, the study opens a new avenue for the treatment of diseases such as ulcerative colitis or Crohn’s disease, in which the intestinal barrier becomes so weakened that bacteria can migrate to other organs, causing inflammatory processes.

Until now, only a few descriptions have existed of specific commensals in mouse microbiota that stimulate the immune system and regulate the lymphocyte population, which helps ensure that bacteria remain in the niche where they are beneficial.

“Our research shows that there are molecular patterns present in or secreted by commensal intestinal bacteria which are by a receptor in the immune system cell called Mincle,” reported El Salvador Iborra, a researcher in the Department of Immunology, Ophthalmology ENT at the UCM.

This interaction between Mincle and beneficial Lactobacillus bacteria occurs in regions of the small intestine called Peyer’s patches and promotes a beneficial response in the host.

A reduction in lymphocytes leads to a weakened barrier

To carry out the study, the researchers used Mincle-deficient mice, or mice deficient in one of the proteins involved in intracellular signalling of this receptor, called Syk.

The researchers found that this deficiency led to a failure to produce the instructions necessary to generate the intestinal lymphocytes essential for regulating the intestinal immune barrier function.

“We found that as a result of this reduction in the lymphocyte population, intestinal barrier function deteriorated, leading to an increase in the number of bacteria capable of migrating from the intestine and reaching the liver, generating hepatic inflammation and metabolic changes”, Iborra explained.

The results of this study open a new avenue for treating disease, such as “the administration of beneficial probiotic microorganisms capable of interacting with this receptor, or prebiotics capable of promoting the growth of these intestinal bacteria”, noted the UCM researcher. Iborra also added another possibility: treatment with synthetic compounds capable of binding to Mincle and triggering the beneficial response mediated by this receptor.

In addition to inflammatory bowel diseases, stress, poor diet or overuse of drugs can also weaken the intestinal barrier.