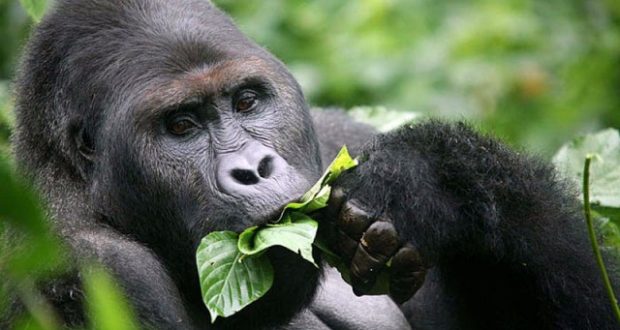 Gut microbes provide many services for their hosts, including digesting their food. Researchers have long known that mammals with specialized diets, such as carnivores and anteaters, have special types of gut microbes that allow them to eat that diet.

Is the same true in primates? In the largest published comparative dataset of non-human primate gut microbiomes to date, a new Northwestern University study set out to find whether leaf-eating primates have similar gut microbes that help them break down their leafy diet, which is full of fiber and toxins.

A common theme in the microbiome field is that host diet has large effects on the gut microbiome — both across lifespans (week-to-week changes in host diet change the gut microbiome) and across evolution (mammals with similar diets have similar gut microbes regardless of their evolutionary histories), said Katherine Amato, PhD, lead author of the study and assistant professor of anthropology in the Weinberg College of Arts and Sciences at Northwestern.

Therefore, they expected to see many similarities between leaf-eating primates, regardless of how closely related they were to each other. Rather, the researchers discovered that diet mattered much less than host evolutionary relationships in shaping the gut microbiome.

“Our data suggest that, across evolution, the effect of primate diet on the primate gut microbiome is not large,” Amato said. “Evolutionary relationships between primates are much more important for predicting microbiome composition and function.”

The study is the first cross-species comparison of the gut microbiota that exclusively uses samples from wild animals.

“We conclude that although gut microbes play a critical role in supporting host dietary specializations, their impact is regulated through host physiology,” Amato said.

“Leaf-eating primates shared very few gut microbial characteristics. Instead, New World monkeys shared the most gut microbial characteristics with each other, regardless of diet. The same was true for Old World monkeys, lemurs and apes. These patterns appear to be the result of host physiological traits such as how the gastrointestinal tract is built.”

Cross-mammal examinations of the gut microbiome have been performed, Amato said, but they all had weaknesses in that species with similar diets also had similar evolutionary histories or physiology. Many studies also mixed captive and wild animals, and captivity is known to change the gut microbiome.

“This study was able to eliminate these issues due to the fact that leaf-eating evolved independently multiple times in the order Primates and is associated with a different physiology in each part of the primate tree,” Amato said. “We also only used wild primates, which compared to captive primates, are more likely to have gut microbiomes like those they evolved with.”

Further research could involve looking at more primate species with more varied diets and understanding how the human gut microbiome fits into this bigger evolutionary picture and what it can tell us about our physiology and health, Amato said.