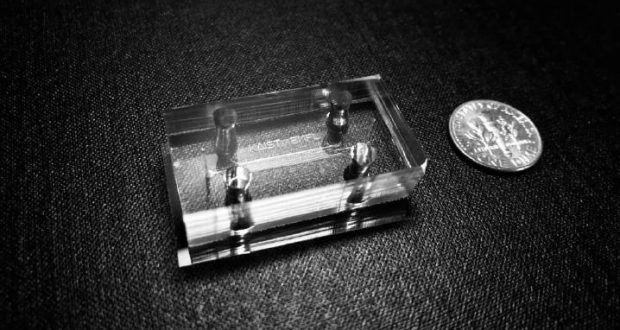 A microchip antibiotic testing platform that reduces the time necessary to identify the right medication, developed by researchers at Korea Advanced Institute of Science and Technology. Photo by Jeon/KAIST

We rely on antibiotics to treat bacterial infections, but the rise of antibiotic-resistant bacteria forces doctors and patients to contend with shifting treatment plans. Furthermore, current laboratory tests to determine what bacteria is causing a particular infection takes days to complete and, in cases of serious infection, the results are often too late for the patient.

Mechanical engineers from the Korea Advanced Institute of Science and Technology recently developed a microchip antibiotic testing platform that takes only six to seven hours to determine the appropriate medication.

“Trying to figure what drug to use at what dosage, in the fastest time possible, is key in successfully treating bacterial infections,” said Jessie Jeon, an author on the paper.

Clinicians often treat life-threatening infections with a cocktail of antibiotics, hoping that one of the antibiotics will stop the bacterial infection. However, blanket-prescribing antibiotics contributes to the rise in bacterial resistance.

“Figuring out the effect of different combinations of drugs in a simple manner is likely to have a big impact on health,” said Jeon. She explained that her team’s speedy microfluidic system was the first for which combinatorial treatments had been tested.

The speed and success of the Korean team’s new antibiotic susceptibility testing system is due to two key innovative design features.

The first feature was developing an antibiotic dosage range, crucial for calculating the minimum inhibitory dosage that prevents bacterial growth. By continually pumping antibiotics through the half-millimeter-wide channels in the microchip, the team establishes a dosage range through microchip within 30 minutes. A critical time saver, the dosage range enabled the team to determine the minimum inhibitory dosage within a single test.

The second feature was using a convenient method to quantify bacterial growth within the microchip. Images were taken of the agar-encased bacteria and the difference in color between areas of agar at a higher antibiotic concentration, where no bacteria grew (which were dark), and the more reflective white regions, where bacterial colonies grew more easily, was quantified on a position-specific grayscale.

Alignment of the five antibiotics tested in this new system with the clinical gold standard measurements suggests that the microchip system is sensitive enough for clinical application, Jeon added.

“We can see that our assembly works pretty robustly with a single drug, and have also shown it can work with two drugs; now we want to further optimize the application to combinatorial drugs,” said Jeon.